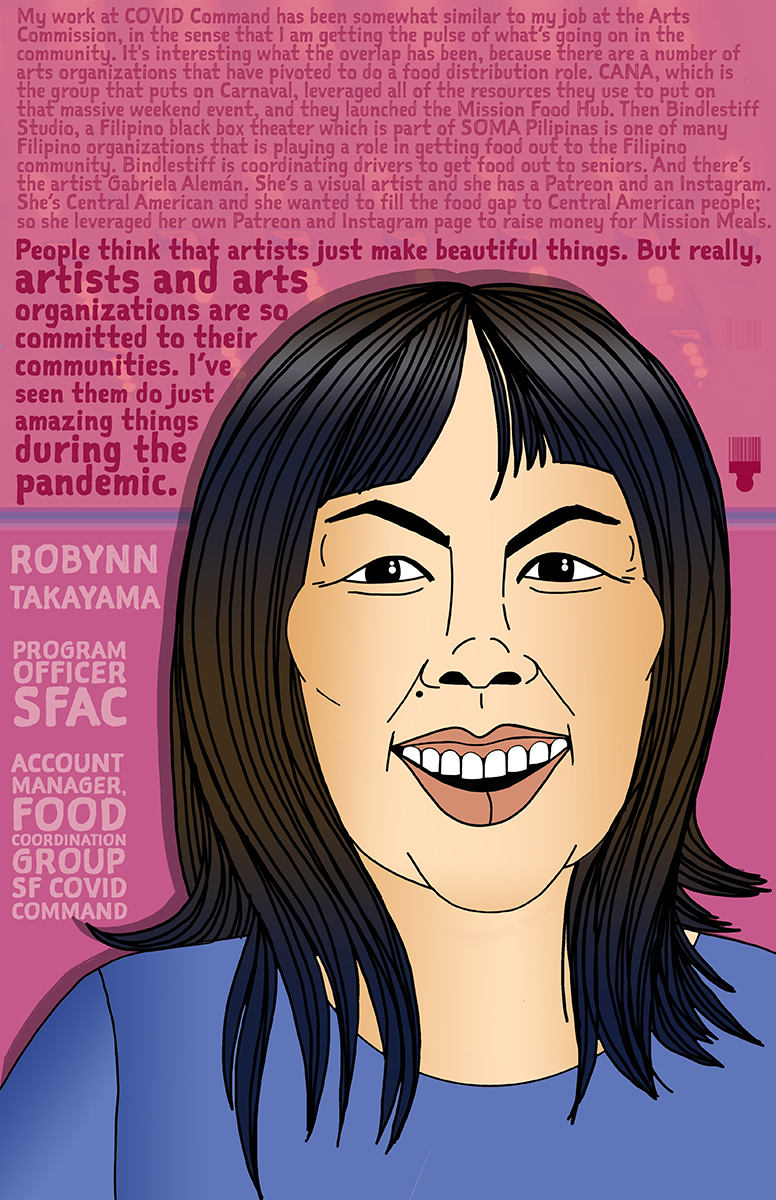 Artists As Our Culture Keepers

The year is 2121, one hundred years from today. A young San Francisco student, say an eighth grader, is given a school assignment to create a presentation capturing a significant moment in the city’s history. He/she/they heads to the San Francisco Main Public Library and is directed to the City Archives. With a little encouragement the research topic is chosen – “2021: the COVID-19 Pandemic.” Among the Archives’ collection of posters and flyers and other documents our student finds in the city’s COVID -19 Time Capsule are four 100-year-old portfolios, both print and digitally produced by four specially selected artists who used their imaginations and skills to leave a record of what it was like to live during the COVID-19 crisis.

Those portfolios are being assembled right now by comic artists/illustrators Ajuan Mance and Bo Rittapa and photographers Mabel Jimenez and S. Renee Jones. All four are participants in the COVID Command Center (CCC) Artist in Residence project. The CCC is located in the Moscone Convention Center where hundreds of city employees are deployed to fight the pandemic. One is Meg Shiffler who had been the San Francisco Arts Commission (SFAC) Galleries Director. An artist herself? “No,” she says, “Everybody asks that.” Her title now is Arts Recovery Liaison. “I came to my deployment thinking about artists and thinking about the arts community and really trying to figure out how we could engage artists in this process, a little like the WPA.” The artists are compensated $4500.

After getting the approval of the CCC, and engaging the SFAC and the City Archivist Susan Goldstein, Meg sought recommendations from scholars, other artists and curators. The four artists chosen are all BIPOC. “I think it’s really important to recognize that the city is committed to racial and cultural equity,” Meg said.

The artists embed one day a week for 12 weeks both at Moscone and in the community at large. They have “unprecedented access” to those deployed at the CCC, according to Rachelle Axel, the Director of Public and Private Partnerships. The one artist who spends most of his time there intermingling and observing the deployed as well as time on the streets of San Francisco is comic illustrator Bo Rittapa. He’s readily recognizable in a blue vest emblazoned with “CCC Artist in Residence.” 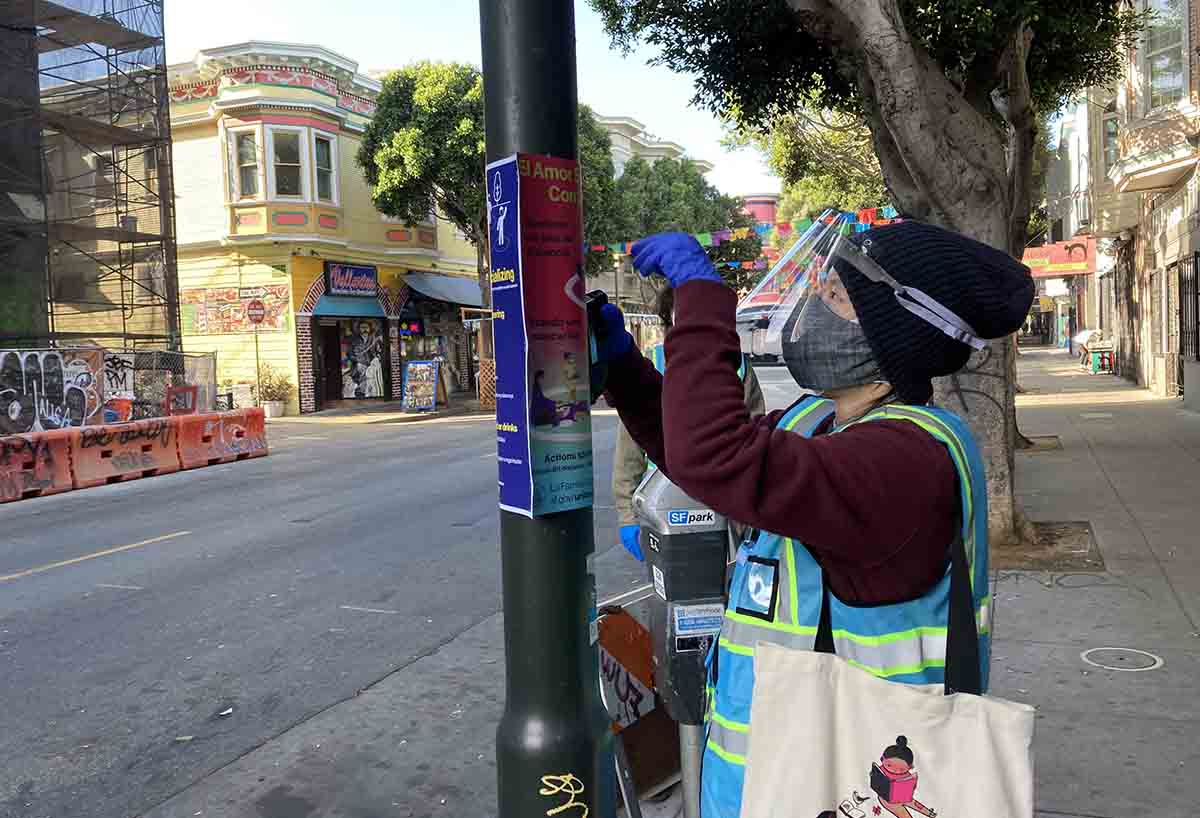 “I value the opportunity to create a new narrative about the COVID crisis. I’m excited to use visual storytelling as a medium to create memories of collective struggle and resilience, as well as pushing the boundaries of what counts as history.”

“I think my experience will be very different because it will be about conversations,” said the other illustrator, Ajaun Mance. Of the four artists, Ajuan is the only one working from home creating portraits. She does Zoom interviews with deployed workers. “Some I talk to at the end of the workdays and some on Sundays, when they’re in a very reflective mood.”

Ajuan says she does a couple of screen shots and records the interview. “I’m asking people to tell me how this experience changed them," she said. When it comes time to sketch the portrait she incorporates quotes from what they’ve said. Ajuan is an artist, illustrator and comic creator. She’s also an Associate Professor of English at Mills College. Her goal is to fill her COVID-19 portfolio with 15 to 20 11 x 17 portraits. The stories of those she portrays will vary.

S. Renee Jones, a photographer, is shooting mostly in the community, on the streets she knows well. She was once homeless. Now she’s teaching photography to people living below the poverty level. She’s been affiliated with the Sixth Street Photography Workshop for the last 25 years.

Also in the streets with a camera in her hands is Mabel Jimenez, a former Photo Editor of El Tecolote newspaper and now documentarian of the COVID-19 crisis in the city. You’ll find Mabel in 94110, the Mission District, her community, the hardest hit region of the city.

“One image that kinda stuck with me was the image of a father and his small, maybe three- or four-year old son,” Mabel said. The Dad was in line for a COVID-19 test, perhaps distracted by the thought of “Maybe me.” His giggling son wanted to play, and the son won.  “Life is going to find a way,” Mabel observed as she shot the interplay.

“There’s a lot of focus right now on how hard things have been, how awful 2020 was and 2021 is shaping up to be, and there’s all this conversation about things that are happening to us. But I want to focus on not just what happened to us, but what we are doing about it, what communities are coming together to do – seeing people not just as victims but as survivors.” That’s not a new concept, but what Mabel is enjoying is the freedom in this residency program to push the boundaries, as Bo said, of what constitutes history and through whose eyes that history is being told.

This critical period – the days of masks and sheltering in place – could turn out to be a pivotal inflection point in the relationship between art and society. Who’s to help us understand and get through it? There’s a growing applaudable recognition that artists are our culture keepers. And if a body of work is to be representative of our diversity, there needs to be greater equity in our financial support of people of color and a license – freedom – for those artists to depict the world as they see it. (Portfolios produced by the artists in residence at Moscone will be available to the public once they are completed and sent to the City Archivist and the library reopens.)

To facilitate just that, across the Bay in Oakland, Akonadi Foundation has partnered with Tao Rising to create an arts funding opportunity, Creatives in Place, that is something like the MacArthur Fellowship Genius Grants. Twenty-two artists from throughout the Bay Area have been awarded grants of $10,000 each to use in any way they please. “The artists are all at different places in their career,” said Vanessa Camarena-Arredondo, Program Officer at Akonadi.

Vanessa learned to sing at her grandmother’s table and before she entered the fundraising sector, she performed Afro-Puerto Rican music. Experience has taught her a lot. “We wanted to take away the labor that grant writing requires of artists.” The one stipulation is that the recipients – all chosen by recommendations – had to do a taped interview with Tammy Johnson, an artist in her own right as well as a consultant on equity issues in the arts for the last five years. She’s a full-figured, older Black woman who does Egyptian Belly Dancing. You can’t help but love her. 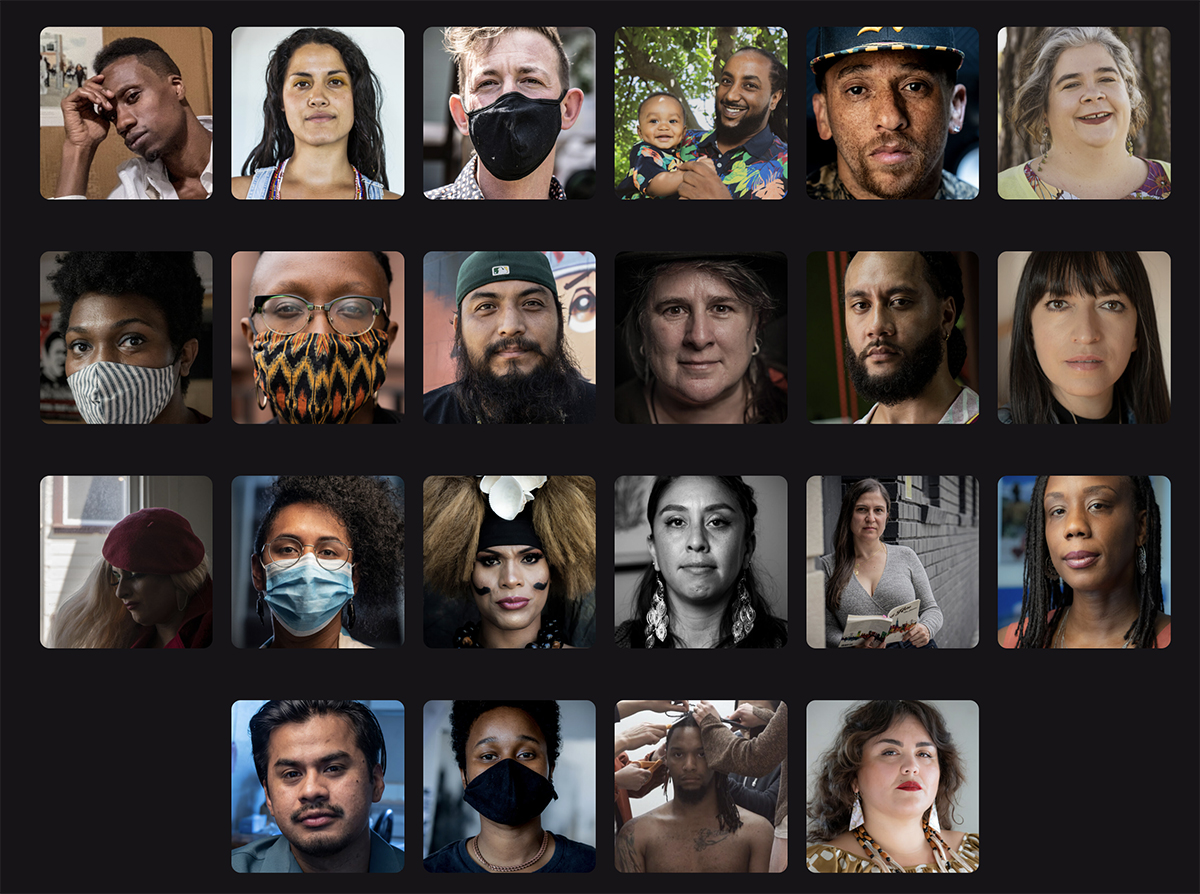 “Creatives in Place is definitely a play on Shelter in Place,” she said. Many of the artists Tammy is dealing with face the challenge of finding affordable studio space due to gentrification. Access to performance space is also a challenge because most venues are shut down due to the pandemic.

“COVID is a game changer in every industry including the arts. Some of the things we’ve been doing are no longer practical, or doable. Some of the artists are saying we’re not going back to a lot of old practices that did lead to structural oppression and inequity and disparity.”

These interviews were edited and collected to serve as a kind of a listening project for donors in our digital world. The intent is to encourage a more bottom-up donor as opposed to a top-down model where the true needs of artists are heard and met. Links were sent to about 150 potential donors. The fundraising is now underway.

One of the artists interviewed is singer Rashida Chase who grew up in Oakland, was part of the Oakland Youth Chorus and later joined a group of former members who sing a variety of musical genres including songs of social protest.

“I think that artists here and especially black and other artists of color have been particularly marginalized in a very specific way and we are not afforded opportunities like this very often. I want artists to know it’s okay to say I’m an artist, (period).”

Since the launch of the Creatives in Place website, another artist, Afro Urban Nkeiruka Oruche, says she is not only thankful for the opportunity to obtain new financial support but that this whole experience has given her a new appreciation for her own resources. She said she is now joyous to rehearse in her own backyard and tape performances on street corners adding, “I feel like I’ve been reborn.”

The full listening project is available online with a beautifully produced opening video.

Below: Father and Son at Mission & 18th Testing Site by Mabel Jimenez, CCC Artist in Residence 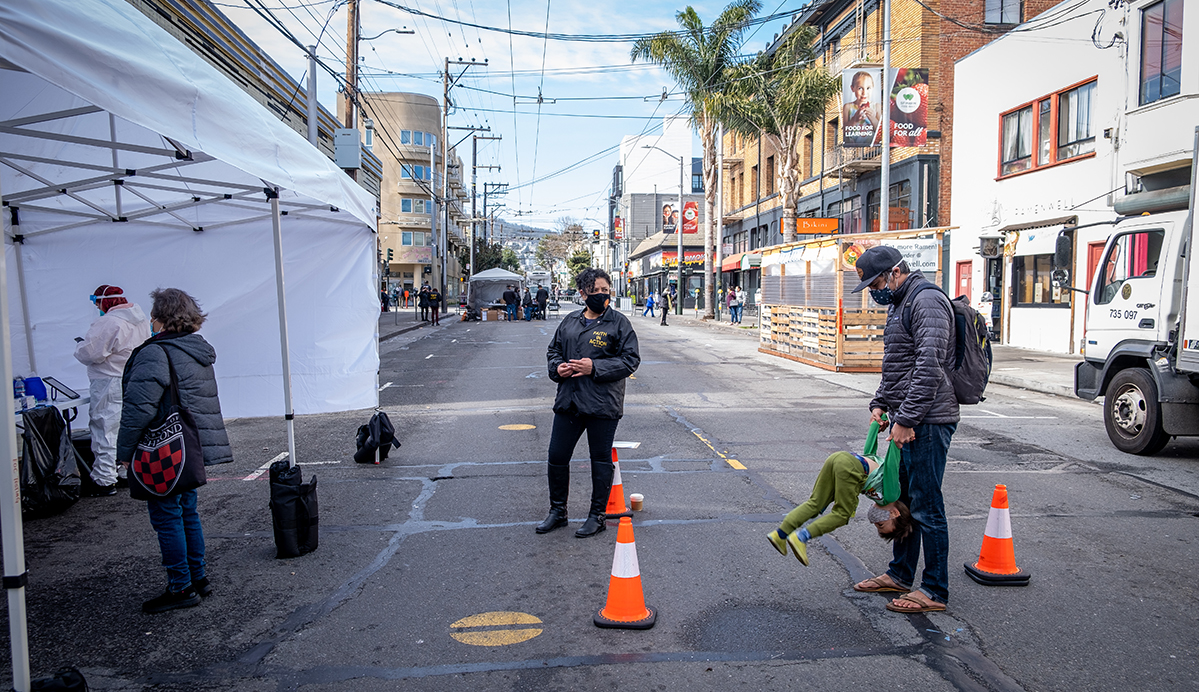