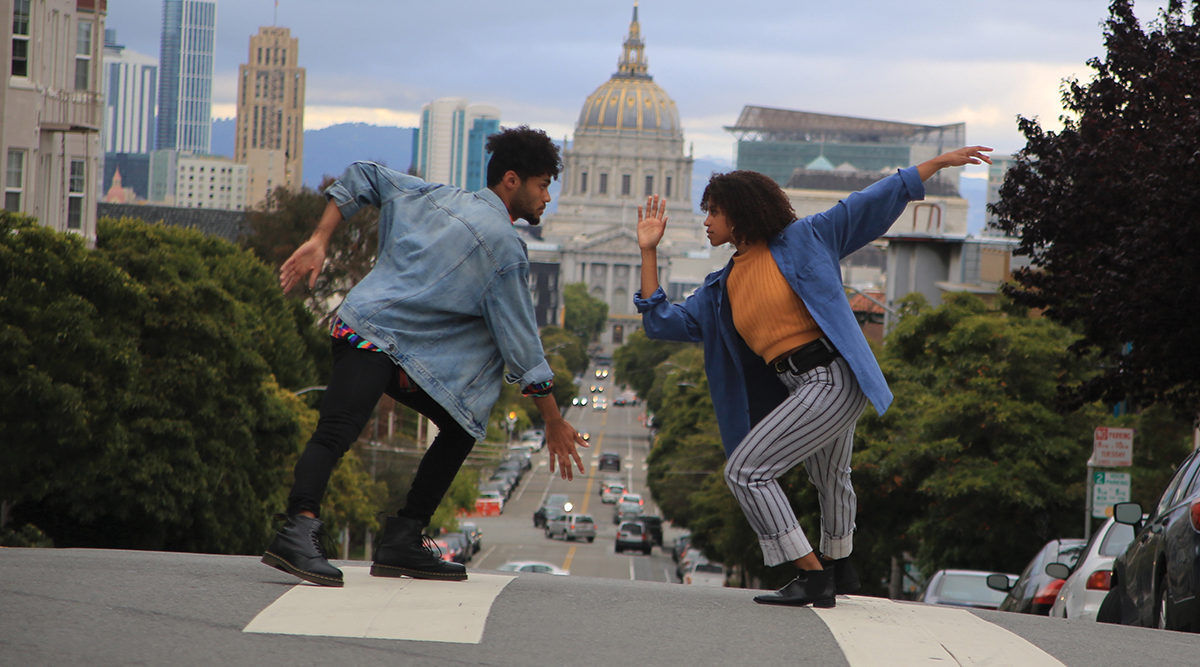 I, Too, Sing America

I, too
— Langston Hughes

I, too, sing America.
I am the darker brother.
They send me to eat in the kitchen
When company comes,
But I laugh,
And eat well,
And grown strong.

Tomorrow,
I’ll be at the table
When company comes.
Nobody’ll dare
Say to me,
“Eat in the kitchen,”
Then.

Besides,
They’ll see how beautiful I am
And be ashamed —

I, too, am America.
(TheatreWorks.org. Voices of Democracy: “I, Too,” Tim Bond) (SFBATCO.org: “I, Too, Sing America,” Virtual Performance)

In 1926, Langston Hughes published his first book of poetry, Weary Blues, that contained the poem, “I, Too,” which spoke to the inequality and exclusion Blacks painfully and courageously endured in all aspects of American life. Now, nearly a century later, the words of Hughes, an incisive writer many have called the poet laureate of Black America, continue to resonate. So much so, that two Northern California theatrical companies, unbeknownst to each other, interpreted the poem in productions this year designed to respond to the political turmoil and the “I-Can’t-Breathe” moments that have bloodied this year, 2020. Both companies believe theatre provides a unique venue where impactful conversations can be explored.

At TheatreWorks Silicon Valley, Tim Bond, the new Artistic Director, chose to perform the poem himself. Seated on a dark stage to the accompaniment of a jazzy saxophone and flashing pertinent photo clips, he uses the poem to proclaim, “my voice as a BIPOC (Black, indigenous and people of color) artist and producer will not be silenced.” One cannot imagine silencing Mr. Bond. He’s committed, convincing and charming. He’s very clear about his mission.

His performance (available on the website) was staged as a segment of “Voices of Democracy,” an online by subscription-only series, created by Bond after the pandemic indefinitely shut theatres down. He said it was “aimed at upholding racial justice and getting out the vote as key pillars of our democracy.”

“Great theatre, great art, can provoke thought, provide much needed different points of view, open hearts, and make us, as the late U.S. Representative John Lewis once said, ‘stand up, speak up, speak out’.”

“In theatre we give voice to people who may not have always been given voice in society. So I am looking for a diverse, very inclusive theatre that is celebrating all people’s voices and is welcoming people from all backgrounds to be able to participate in that event, and so, to me that feels like democracy.” In addition to “Voices of Democracy,” Tim also presented two other online productions. “Hold These Truths” deals with the Japanese American internment during World War II and “It Can’t Happen Here,” a radio play about the rise of fascism in the 1930s.

Tim is greatly looking forward to directing “Gem of the Ocean” by August Wilson at TheatreWorks. He has directed all but three of the late playwright’s ten plays, and he says he promised Wilson, who was a friend, that he would do them all. “Gem of the Ocean” is one of six shows planned through May of 2022. There are others in the works too, many of which offer “a window on really difficult issues that we face,” Tim said. “I want you to be moved, transformed.” 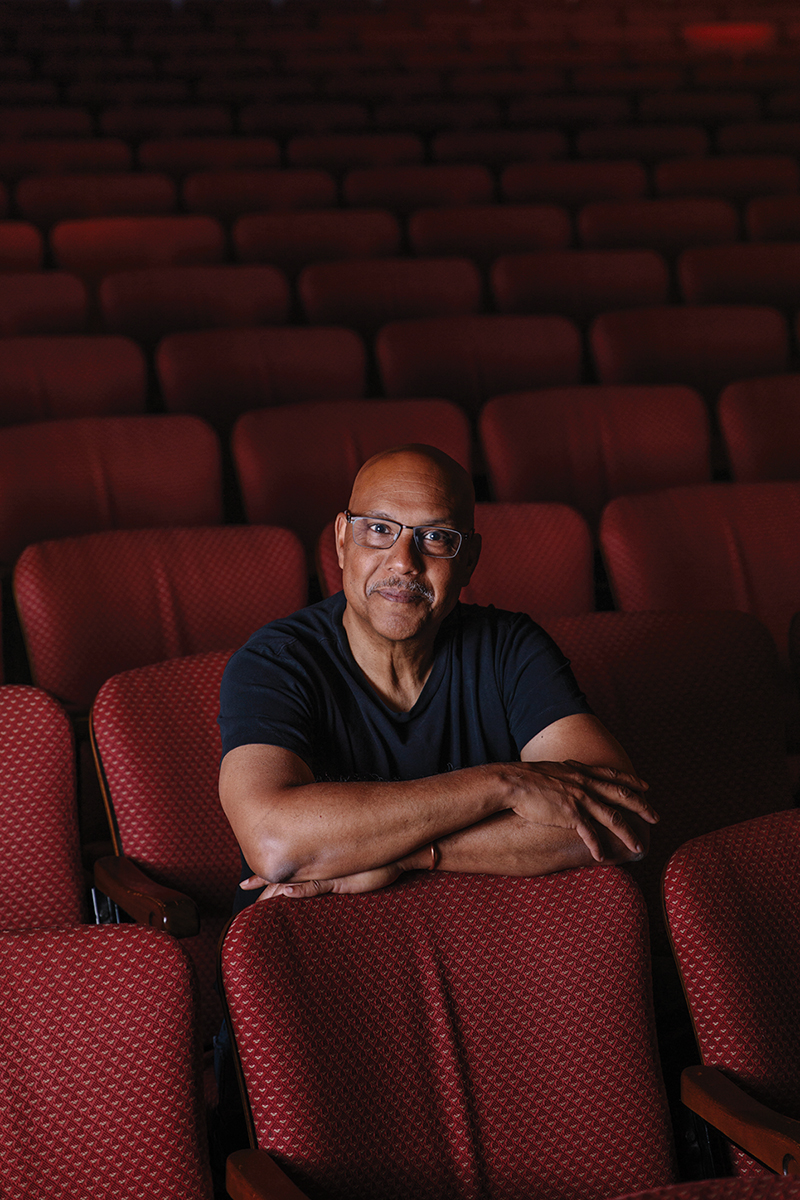 Tim, who is 60, got his first civics lessons at home in Toledo, Ohio where his parents were active in their community. Later, when his father became president of California State University Sacramento, he would bring home visiting Black intellectuals like Toni Morrison, who his mother, incidentally, had gone to grammar school with back in Ohio. When Tim reached college, Howard University, he majored in political science before the stage called him. He holds a BFA in Dramatic Arts from Howard and a MFA from University of Washington.

TheatreWorks Silicon Valley was started by Robert Kelley as a workshop for students operating out of parking garages and warehouses in Palo Alto. Before COVID-19, it had grown to staging productions at the Lucie Stern Theatre in Palo Alto and the Mountain View Center for the Performing Arts. With an 11-million dollar budget, a 30-member board and 48 permanent staff members, it won a Tony Award for Regional Theatre in 2019.

As a way of ending this very tough year, Tim is writing and directing “Simple Gifts,” a virtual play for the holidays scheduled for December 10-27. He says he wants to celebrate diversity by looking at our interconnectedness as evident in our different traditions of celebrating the holidays. “Simple Gifts” takes its title from a song by Aaron Copeland, and it will include music as well as some Theatre of Testimony features like memories and personal stories. “I want it to be positive and warm and joyful,” Tim said. A catharsis? “Boy, we need it right now. We need to heal.”

Also exploring the online platform for theatrical productions is SFBATCO, the San Francisco Bay Area Theatre Company, co-founded by Rodney Earl Jackson, Jr. and Marcelo Javier. Each Thursday evening at 6 they produce what they call a “virtual variety show” inspired by television productions like the Carol Burnett Show. They play for laughter and pure joy, but that doesn’t mean they aren’t just as motivated as Tim by serious political concerns. When we sit down - virtually - for an interview, Marcelo tells us that he was raised in San Francisco. He calls himself a “local” rather than a “native,” a term which is no longer politically acceptable in his inclusive world. Rodney describes their mission as seeking authenticity and to him that means diversity.

Last April before the murder of George Floyd propelled thousands upon thousands of Black Lives Matter demonstrators into the streets to protest police brutality in the Black community, Marcelo and Rodney produced “I,Too, Sing America,” based on the Hughes poem. The video was composed by Othello Jefferson, using the Hughes poem as an organizing motif, with choreography by Christine Chung and direction by Jamie Yuen-Shore. It showcases the voices and experiences of several American poets of color. Whereas Tim’s reading of the poem was urgent and morally commanding, the SFBATCO musical finale of, “I, Too, Sing America,” (It can be seen on their website) invites viewers to get up and dance and sing along with the performers who are shown in gallery view each doing their own thing. It’s a multicultural moment. Celebratory.

“Everything is changing,” Marcelo said. And Rodney and Marcelo, both 30, are very much products of the changing times. For one thing, they have a strong desire for entrepreneurship. “We want to make new things,” Rodney said. And they are using digital technology to do it.

The two collaborators met as young teenagers and attended the Ruth Asawa San Francisco School of the Arts. Rodney went off to Carnegie Mellon University and Marcelo to Syracuse University where they studied theatre arts. They met again in New York City and decided to return home because, as Rodney said, they “were tired of fitting into someone else’s model of what they were.” But when they get home, the city was “almost unrecognizable,” Rodney said, due to gentrification and outward migration. Their challenge: “How do we amplify the voices of those who are still here?”

Both Rodney and Marcelo are song-and-dance men with terrific smiles and comic timing. They loved old school variety shows, but admitted, “those people didn’t look like us.” “We understood the style, the essence, the why and the how. But what would it look like to have a Latin man (Marcelo’s father is from Guatemala) dancing next to a Black man (Rodney) singing on a show with a guest who sings just like Eartha Kitt?” But they envision doing more than variety. They want to do “straight” plays, both adapted and new work. And even now, interspersed with the song and dance, there may be political commentary - a shout-out to first responders fighting the COVID-19 pandemic, commentary on climate change and, as you might expect, reminders about the importance of the ballot in this very contentious election year.

Then, they discovered Twitch.tv (Amazon owned). Marcelo found the digital platform, which was first and foremost a site for video gaming, early on in the pandemic. It was being used by the queer community for drag shows. Marcelo said his motto is “Follow what drag queens are doing because they are always ahead of the curve.” SFBATCO’s weekly shows are free to viewers but for the full interactive experience, you have to subscribe for $4.99 per month.

“If you have a membership, Rodney said, you can chat along with us and other people in the community. People think it might be distracting, but it’s great. It creates community albeit digital.” They have designed their own emojis and they have a virtual tipping jar too. Several other small theatre companies are also following this engaging digital model.

For the holidays they are serving up good, old-fashioned entertainment, live and socially distanced in-person. At the Ocean Ale House in San Francisco, Dec. 17, they are staging a Tap Takeover, tap as in beer and dancing. Half the proceeds from the food, beer and wine go to SFBATCO. 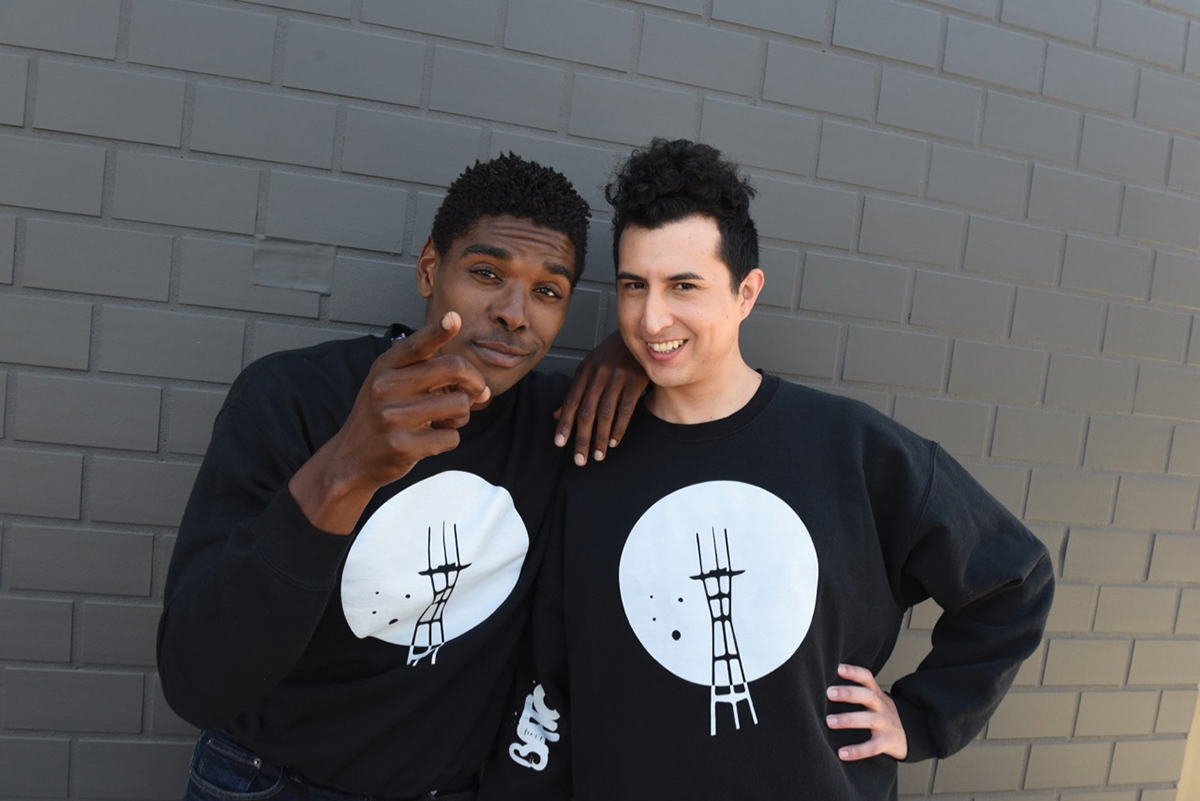 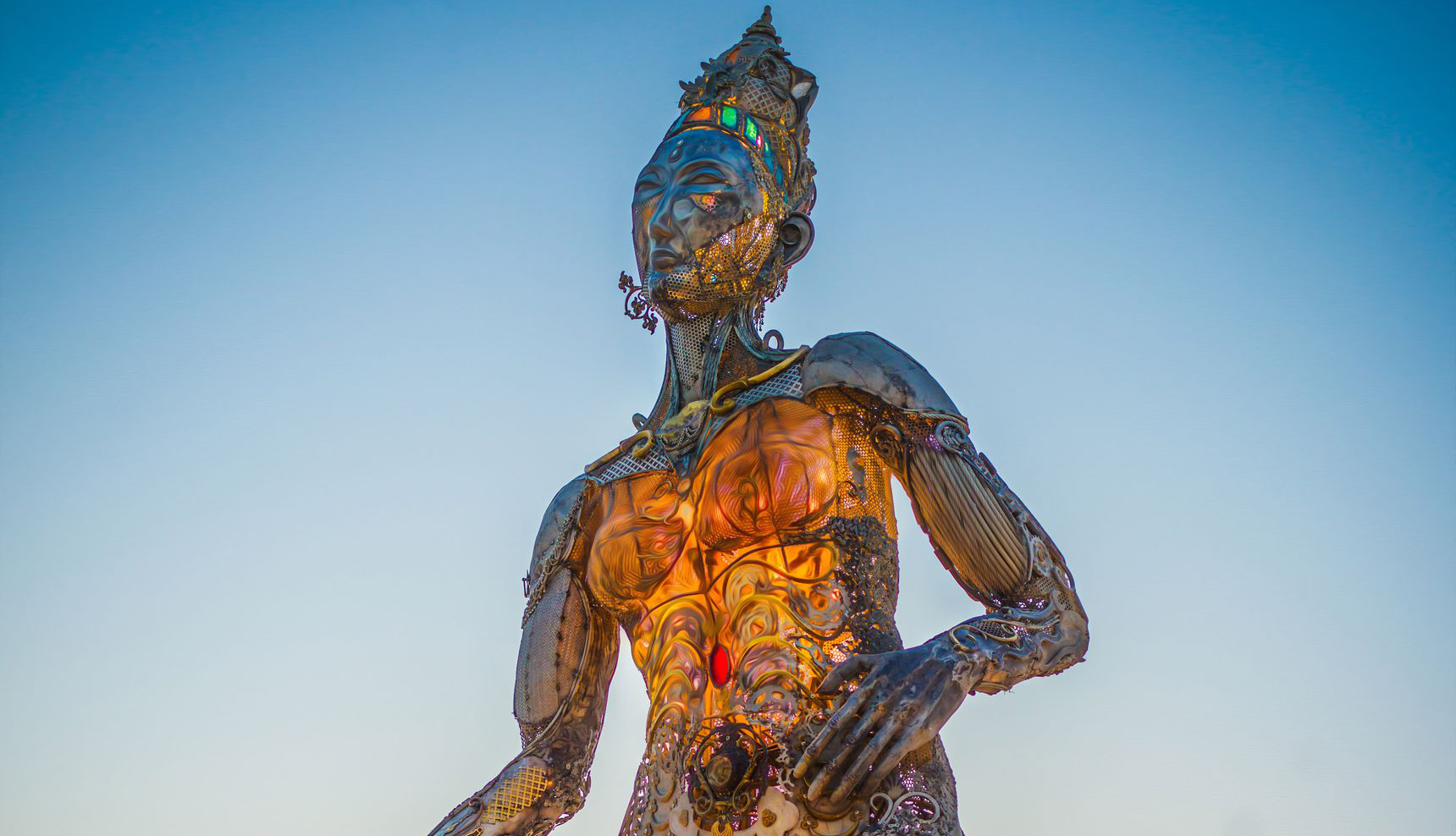 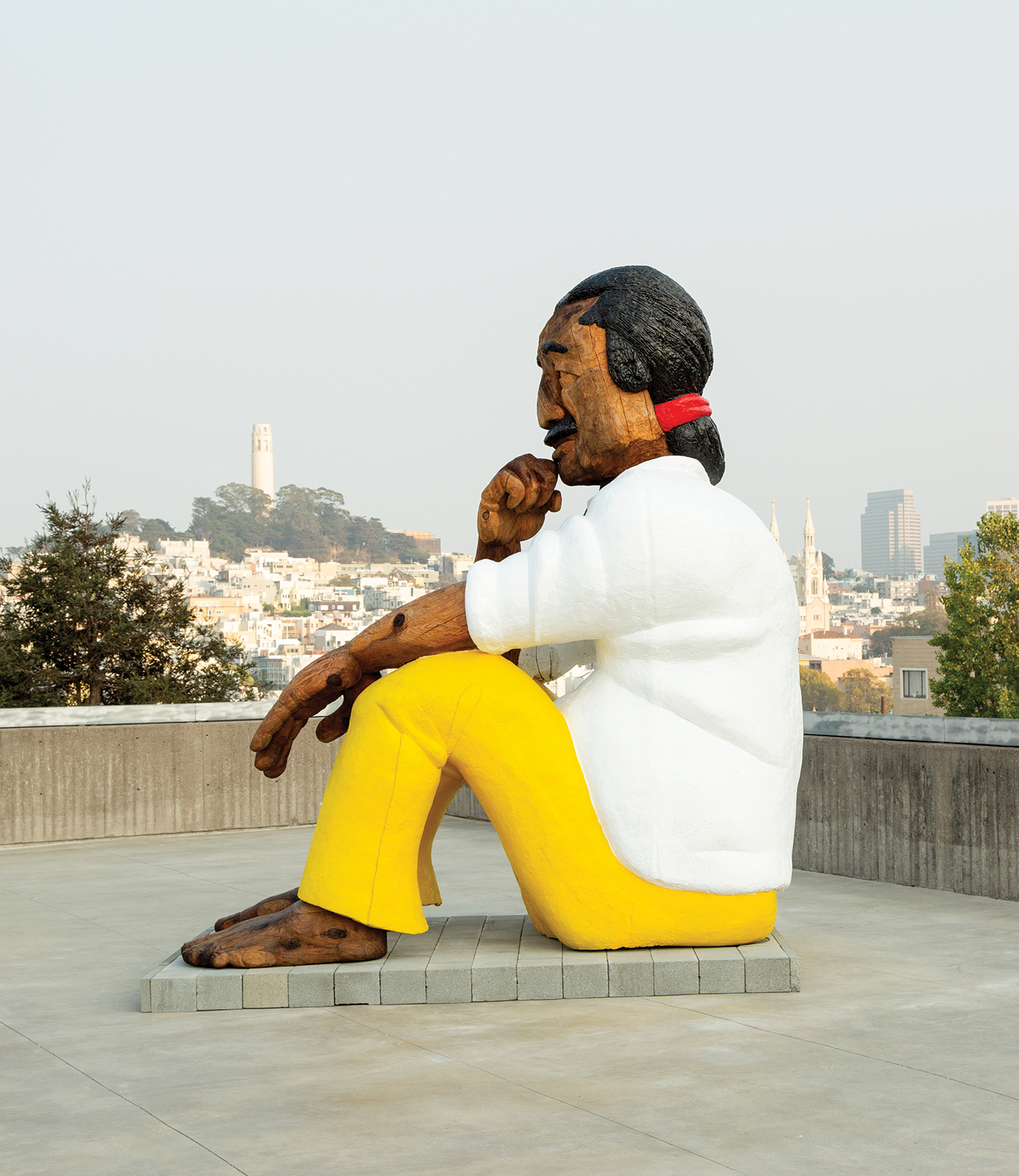 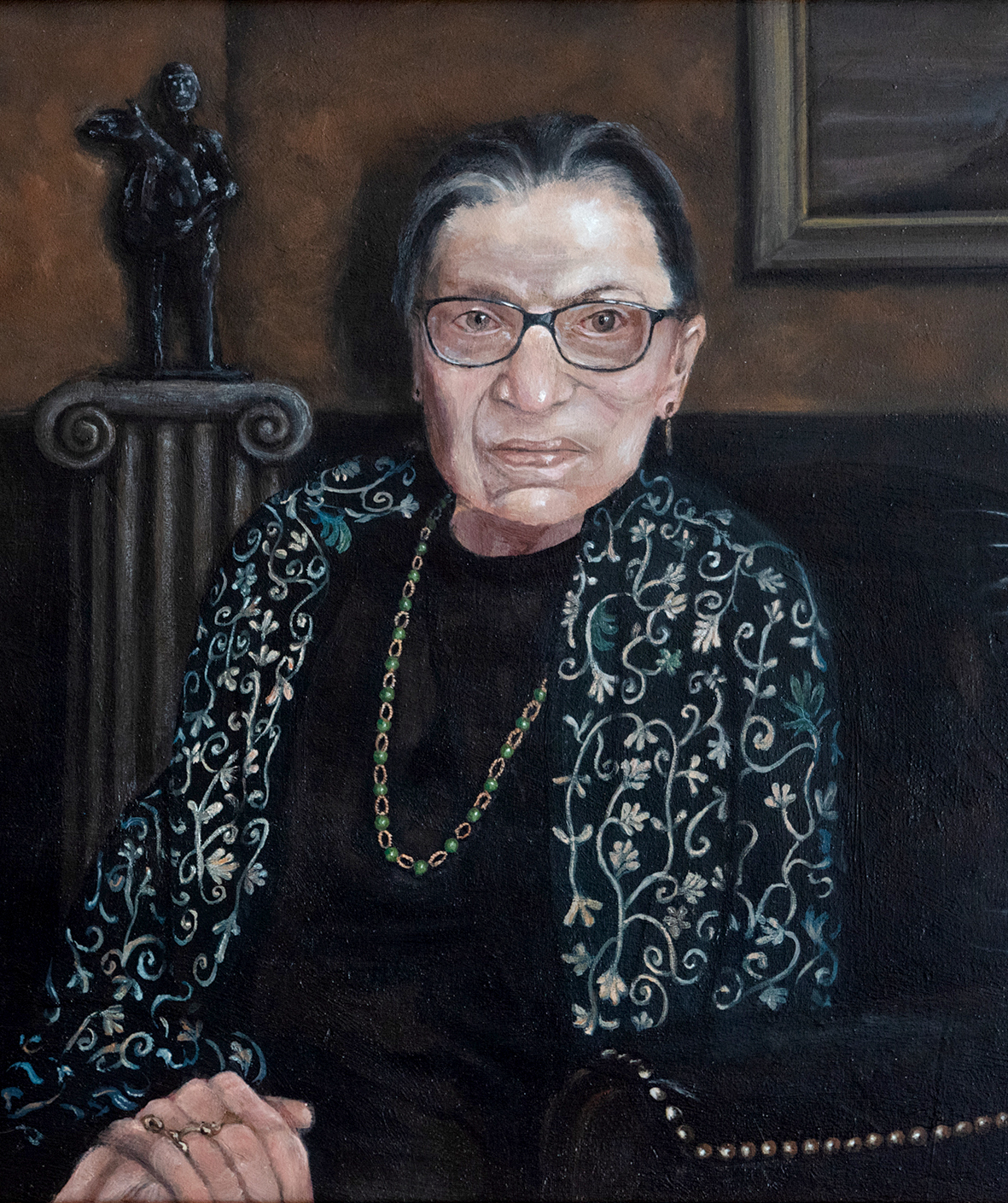 By Zoé Samudzi
See All Stories