The past year has been a time of tumult for Asian Americans, but that has also raised interest in the narratives of this growing community. On the heels of Oscars wins for Asian American storytelling in "Nomadland" and "Minari," CAAMFest presents 11 days of films and conversations during Asian Pacific American Heritage Month, many featuring Bay Area filmmakers or actors, including Margaret Cho, Dante Basco, and MSNBC’s Richard Lui.

“The events of this year have called to attention how much we need to see Asian American stories on-screen and how beautifully they can be told,” says CAAM Executive Director Stephen Gong. “Our slate of films all speak deeply about the times we are in, focusing on themes of belonging, the past year’s pandemic, and ultimately the depth and diversity of the Asian American experience.”

The festival is produced by the Center for Asian American Media (CAAM), which has been based in San Francisco since its founding over 40 years ago. While the pandemic forced many artists to hit pause, the widespread anti-Asian rhetoric and violence have spurred many filmmakers to keep creating. CAAMFest will include 16 programs that explore the way the pandemic has affected everything from healthcare to parenting to nightlife. Featured programs also highlight international films in Hong Kong Cinema Showcase — including a 25th anniversary screening of Wong Kar-Wai’s classic "Happy Together" — and this year’s new Direct to Taiwan program.

“The world may have paused due to the pandemic, but our filmmakers didn’t,” says Masashi Niwano, festival and exhibitions director at CAAM. “The vibrancy and energy of this year’s programming is unmatched with our filmmakers bravely telling their unique and vital stories.”

Although theaters, museums, and many other arts establishments have remained closed or operating under limited scope since March 2020, CAAM has produced numerous virtual events to provide cultural programming that is relevant to these times. CAAMFest 2021 will be the organization’s third festival in 12 months. Like last year’s two events, the programs will be mostly virtual. But the festival is introducing more socially-distanced, in-person events, as San Francisco eases into the yellow tier.

CAAMFest will open with three nights of drive-in screenings at FORT MASON FLIX, accompanied by an assortment of food trucks serving Vietnamese and Chinese cuisine, along with waffles and fried chicken.

Most of the films can be watched online during scheduled virtual screenings or through on-demand streaming between May 13-23. 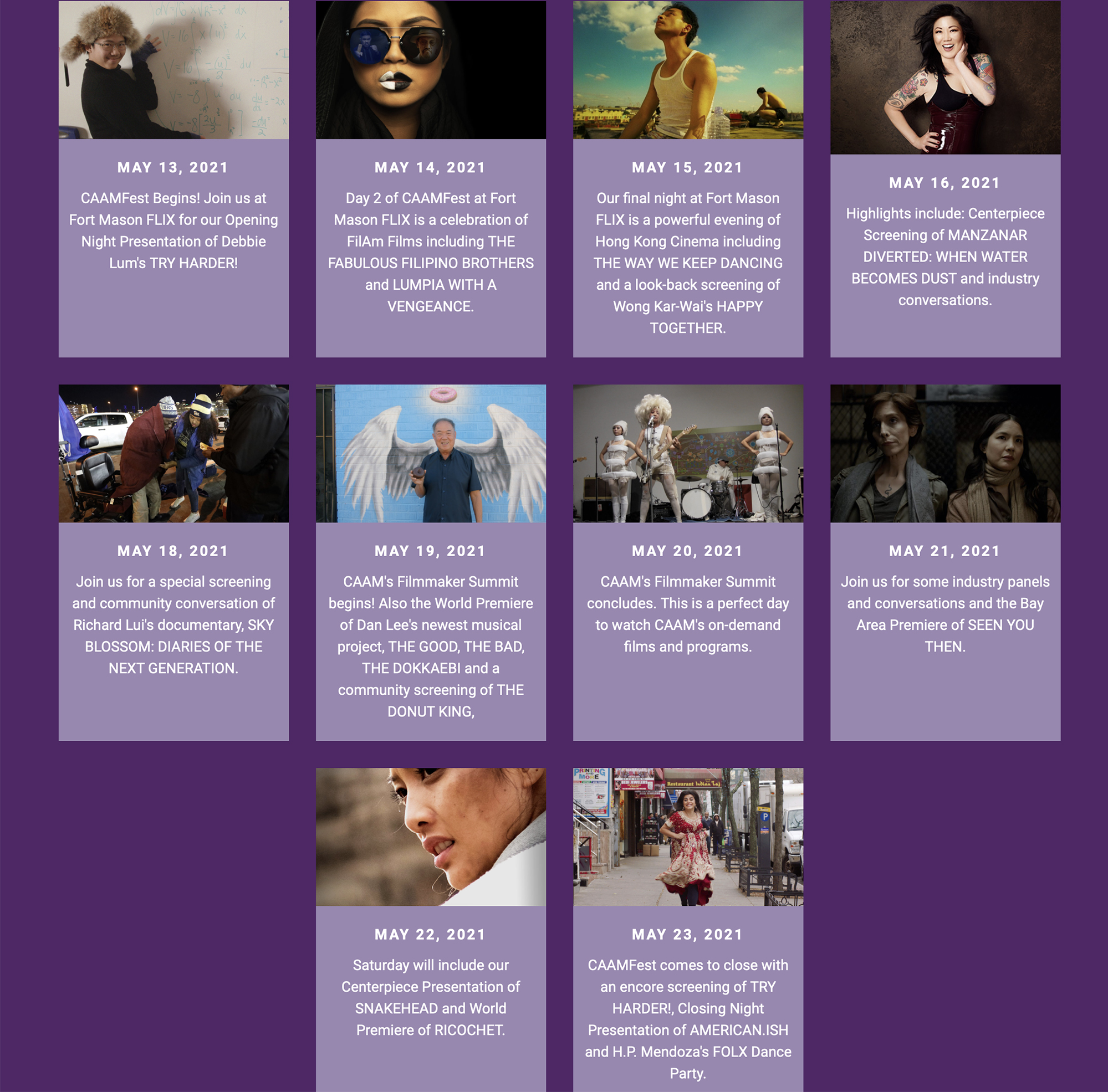 General admission tickets for virtual screenings and panels range from complimentary to $15. Drive In Experience ranges from $45-$50. For more information, visit the ticketing information page at caamfest.com

Image: Centerpiece Presentation "Snakehead," directed by Evan Jackson Leong. In this historical piece, we are transported to New York’s Chinatown where Sister Tse (Shuya Chang) arrives by a snakehead, a human smuggler. Saturday, May 22, 7pm